With cheap head mounted displays such as Oculus Rift coming to the consumer market, virtual reality exposure therapy (VRET) applications for self help are about to follow. In the past these methods were only available for medical research, since early VR equipment was very expensive. With these consumer VRET applications coming to the living room, several questions remain.

Will people actually respond to virtual humans in a virtual environment (VE) in the same way as they would to real humans? Do people actually experience anxiety when speaking to the virtual audience? Does it matter if you get negative or positive feedback? And more importantly, can virtual reality exposure therapy be used to overcome speech anxiety? And if so, how long does it last? To answer this question we looked at several research papers to determine the effectiveness of virtual reality on overcoming social phobia such as public speaking anxiety.

What is Speech Anxiety?

Speech anxiety is the fear of speaking in public and is also referred to as glossophobia. Public speaking anxiety is closely related to performance anxiety, commonly known as stage fright. It originates from the fear of being judged and is the most common social phobia, as it affects almost everybody. Although, how strong you experience this fear depends from person to person.

Public speaking fear can be a very disabling anxiety disorder and people with who suffer from this type of social phobia can feel like they are about to have a panic attack. These people tend to avoid specific situations where they are required to speak in front of a group of people, making the problem only worse. It is often the beginning of a negative spiral, because avoidance feeds the fear even more.

Speech anxiety can become a career limiting problem later in life as people with this phobia tend to pass on assignments at work with would require having to speak in front of a large audience. This will inevitable lead that colleagues that feel comfortable speaking get higher chances to get promoted to jobs with more responsibility, since often jobs with responsibility require public speaking.

The leading psychological treatment for social phobias such as speech anxiety or the fear of public speaking is cognitive-behaviour therapy (CBT). CBT is a combination of cognitive therapy where the therapist tries to find the root cause of the negative thoughts that cause the phobia and behavioral therapy which tries to determine the factors that trigger the anxiety and tries to change the behavioral response. CBT involves gradually exposing the subject to feared situations and confronting them with their own subconscious thoughts.

Graduated exposure to the situations in which the patient feels anxious, results in that the patient becomes desensitised to these factors and in this way avoidance behavior can be taken away; this is also known as systematic desensitization. Today, virtual reality exposure therapy is becoming an accepted method to recreate the anxiety factors in a VE, to overcome social phobia.

VR exposure therapy is not new and it roots go back as far as the beginning of 90ties of the last century. The VR equipment back then costed thousands of dollars and were only reserved for academic and medical research. Recent advances in display and processor technology made it possible for cheap head-mounted displays (HMD) to enter the consumer market, opening the door for self help VRET applications.

VRET is already a proven method[1] to treat PTSD in soldiers, but can it also help for public speaking anxiety?

Do People Experience Speech Anxiety in Front of a Virtual Audience?

In a study[3] published in 2006 in CyberPsychology & Behaviour, M. Slater, DP. Pertaub, and C. Barker researched whether people with public speaking anxiety would react to a virtual environment in the same way as they would in real life. For this they used two groups, one group with confident speakers and the other with speech anxiety. They compared their reactions when speaking to an empty room and a room filled with 5 people with neutral expressions. 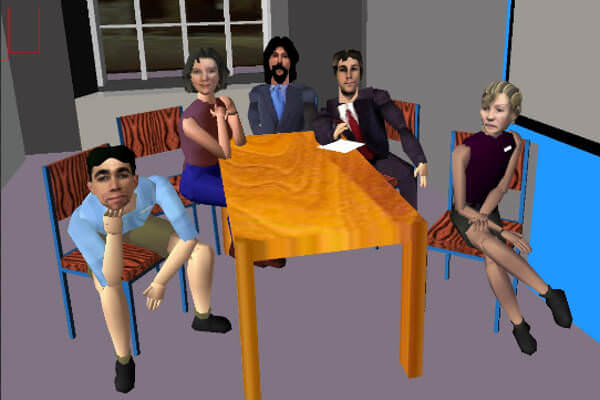 SLATER, Mel, et al. found that the confident people did not became more anxious when speaking to the virtual group of people, whereas the people with social phobia showed a strong increase in speech anxiety. These responses were very strong, even though that the virtual humans clearly did not look realistic. This early research already gave indications that VRET could be used to treat social phobia.

For more details read the full report: “An experimental study on Fear of Public Speaking”.

SLATER, Mel, et al. conducted a study[2] that tried to answer the question whether people would have an emotional reaction to a virtual humans. Would for instance a person with speech anxiety have the same anxiety response to virtual avatars as to real people? Fully aware that they are not real.

The avatars used back then were far from realistic, obviously negatively impacting the immersion factor. Even so, their results showed that people with fear of public speaking react the same way to their virtual counterparts as they would to real human beings. SLATER, Mel, et al. also found that people with speech anxiety were more comfortable with a positive group and found it unpleasant when speaking to a negative audience.

These results again fortify the concept that virtual reality can be used to treat people with public speaking anxiety. For more details download the full pdf of their report: “An Experiment on Fear of Public Speaking in Virtual Reality”.

How does the type of feedback influence Public Speaking Anxiety?

In another study in 2002[4] PERTAUB, David-Paul; SLATER, Mel; BARKER, the examined how people with public speaking anxiety would respond to three types of virtual emotions. They wanted to answer the question of whether a speaker’s anxiety response depends on the type of feedback they get from a virtual audience. The subjects were subjected to a neutral, positive and a negative virtual public.

The results showed that it did not matter what level of confidence the speakers has, the negative audience triggers an anxiety response. The type of public therefore has a very strong influence how the subject perceives his presentation. Mis interpreting the audience facial expressions for negative instead of neutral can lead to higher levels of anxiety.

With their early research SLATER et al. proved that people respond to virtual avatars in the similar ways as they would to real humans and that VRET could possible be used as an alternative method to CBT. The question now remains on how effective is it VRET compared to conventional CBT? In a more recent study[5] ANDERSON, Page L., et al. tried to answer this question by comparing compared VRET to exposure group therapy.

They used an ethnically diverse group with social anxiety disorder as their main fear. The subjects were randomly assigned to either virtual reality exposure therapy, exposure group therapy, or a control group and had to undergo several sessions. In this way they could compare the results from each group with each other.

What they found was that the virtual reality exposure therapy is equally effective as exposure group therapy for treating social fears, and improvement is maintained for 1 year. The answer whether VRET is an effective treatment for social fears is a definitely yes. For more details read their report: “Virtual reality exposure therapy for social anxiety disorder: A randomized controlled trial”.

How long is the Speech Anxiety treatment effective?

Safir, Marilyn P., Helene S. Wallach, and Margalit Bar-Zvi reported that the anxiety levels of people who had experienced conventional CBT and virtual reality CBT (VRCBT) were significantly reduced compared to a wait-list control group. After one year they did a follow up to determine whether the treatment was still effective.

The results shows that both VRCBT and CBT groups maintained their improvement after one year. Next to that no significant differences were determined between virtual reality CBT and conventional CBT. The results demonstrated that virtual reality cognitive behaviour therapy is an effective method to treat social phobia such a speech anxiety under the right circumstances.

Presentation Simulator (PSIM) is a virtual reality software application developed that places you in a virtual environment allowing you present a powerpoint presentation before a virtual audience. For the first time, consumers are given the opportunity of performing self help to overcome speech anxiety.

The presentation simulator software (PSIM) requires an functional Oculus Rift or other VR hardware in combination with a pc or laptop that is powerful enough to run the PSIM application. For more information read the Presentation Simulator Software article explaining all the features of the application.

Get more general information on the pages below or go to our webshop and buy our exclusive Presentation Simulator VR-app and start practicing for a realistic VR-audience:

Disclaimer: the presentation simulation software is developed based on scientific background, but every person reacts differently so no rights can be reserved on the effectiveness of the software.

On this website we use first or third-party tools that store small files (cookie) on your device. Cookies are normally used to allow the site to run properly (technical cookies), to generate navigation usage reports (statistics cookies) and to suitable advertise our services/products (profiling cookies). We can directly use technical cookies, but you have the right to choose whether or not to enable statistical and profiling cookies. Enabling these cookies, you help us to offer you a better experience.